I have to useEffects in my code. in first one I have two setState, the second one is in then of Promise.resolve.
and in the second useEffect I make a request by apollo client.

In some run the output of logs is: 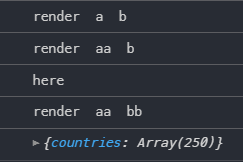 and in some other run:

I expected react to does not batch setState("bb") and setState("aa") at all and always logs like this:

Hey @amirqasemi74! I think the problem is that every fetch takes differents times so the logs are differents, if you try to make a promise and get the same data as the Apollo fetch, you will have your expected behavior. Anyways you can use a setTimeout if one promise takes more time than other.
Here is an example:

I hope I've helped you